Bathroom ventilation systems are designed to exhaust odors and moist air to the home’s exterior. Typical systems consist of a ceiling fan unit connected to a duct that terminates at the roof.
Fan Function
The fan may be controlled in one of several ways:

Newer fans may be very quiet but work just fine. Older fans may be very noisy or very quiet. If an older fan is quiet, it may not be working well. Inspectors can test for adequate fan airflow with a chemical smoke pencil or a powder puff bottle, but such tests exceed InterNACHI’s Standards of Practice.

Bathroom ventilation fans should be inspected for dust buildup that can impede air flow. Particles of moisture-laden animal dander and lint are attracted to the fan because of its static charge. Inspectors should comment on dirty fan covers.

Ventilation systems should be installed in all bathrooms. This includes bathrooms with windows, since windows will not be opened during the winter in cold climates.
Defects
The following conditions indicate insufficient bathroom ventilation:
The most common defect related to bathroom ventilation systems is improper termination of the duct. Vents must terminate at the home exterior.
The most common improper terminations locations are:
Improperly terminated ventilation systems may appear to work fine from inside the bathroom, so the inspector may have to look in the attic or on the roof. Sometimes, poorly installed ducts will loosen or become disconnected at joints or connections.
Ducts that leak or terminate in attics can cause problems from condensation. Warm, moist air will condense on cold attic framing, insulation and other materials. This condition has the potential to cause health and/or decay problems from mold, or damage to building materials, such as drywall. Moisture also reduces the effectiveness of thermal insulation.
Mold
Perhaps the most serious consequence of an improper ventilation setup is the potential accumulation of mold in attics or crawlspaces. Mold may appear as a fuzzy, thread-like, cobwebby fungus, although it can never be identified with certainty without being lab-tested. Health problems caused by mold are related to high concentrations of spores in indoor air.  Spores are like microscopic seeds, released by mold fungi when they reproduce. Every home has mold. Moisture levels of about 20% in materials will cause mold colonies to grow. Inhaling mold spores can cause health problems in those with asthma or allergies, and can cause serious or fatal fungal infections in those with lung disease or compromised immune systems.
Mold is impossible to identify visually and must be tested by a lab in order to be confidently labeled. Inspectors should refrain from calling anything “mold” but should refer to anything that appears as mold as a material that “appears to be microbial growth.” Inspectors should include in their report, and in the inspection agreement signed by the client, a disclaimer clearly stating that the General Home Inspection is an inspection for safety and system defects, not a mold inspection.
Decay, which is rot, is also caused by fungi. Incipient or early decay cannot be seen. By the time decay becomes visible, affected wood may have lost up to 50% of its strength.
In order to grow, mold fungi require the following conditions to be present:
If insufficient levels of any of these requirements exist, all mold growth will stop and fungi will go dormant. Most are difficult to actually kill.
Even though mold growth may take place in the attic, mold spores can be sucked into the living areas of a residence by low air pressure. Low air pressure is usually created by the expulsion of household air from exhaust fans in bathrooms, dryers, kitchens and heating equipment.
Improper Ventilation 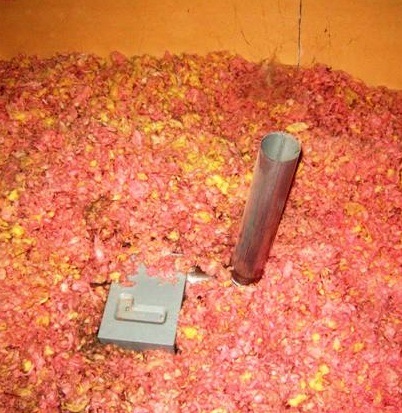 Above all else, a bathroom ventilation fan should be connected to a duct capable of venting water vapor and odors into the outdoors. Mold growth within the bathroom or attic is a clear indication of improper ventilation that must be corrected in order to avoid structural decay and respiratory health issues. This article is courtesy of InterNACHI and can be found at https://www.nachi.org/bathroom-ventilation-ducts-fans.htm.